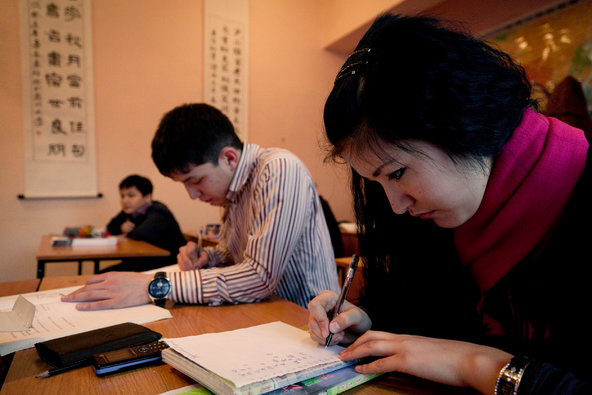 BEIJING — While studying abroad at Peking University in Beijing, Andrew Stead didn’t expect to find a job at Burton, one of the top snow boarding brands in the world.

“In my spare time on exchange, I would go skateboarding around Beijing with friends, including one who worked at Burton. A few months later, I was offered a job at their Beijing office because of my interest in snowboarding and China,” said Mr. Stead, 23, who is majoring in engineering and finance and speaks solid Chinese. He plans to return to Beijing after he graduates soon from an Australian university.

Governments are increasingly recognizing the opportunities that exist for people like Mr. Stead who are able to marry technical skills or hobbies with “Asian literacy.” Also called “global competence,” it represents an understanding of other cultures and languages; but China isn’t the only nation in Asia and people should also be looking more broadly, to Japan, India and Indonesia, to name just three other places, according to some experts.

In 2009, President Barack Obama announced the “100,000 Strong” initiative to encourage 100,000 students to study abroad in China over four years.

In 2012, the Australian government released a white paper titled “Australia in the Asian Century,” described as “a roadmap showing how Australia can be a winner in the Asian century.”

Outside of government, there has been a burgeoning of other initiatives: language teaching conferences, Facebook groups to connect parents interested in the idea of “Asia literate,” even native Chinese speaking nannies who can command decent salaries.

Yet Asia is a very diverse continent. From the 1970s to the 1990s, “Asian literacy” was mostly about Japan. From the 1990s onwards, the focus shifted to China, as its economy expanded fast.

“Unfortunately, less attention is being paid to many other Asian countries including Japan, India, Pakistan and Indonesia, which are increasingly going to play important roles in the world,” Christopher M. Livaccari, the director of education and Chinese language initiatives at the Asia Society in New York, said.

“Global competence is not about speaking Chinese. I worry the United States is putting a tremendous amount of resources into Chinese,” he said. “Thirty years ago we saw this with Japanese. Now, many people who spent all this time learning Japanese are saying, ‘Why did I do this? Japan is not as central to the world or my life as it was once perceived to be.’”

And, what does it even mean to be “China literate?” Is it about rattling off fluent Mandarin? Or can it be less than that — a basic understanding of Chinese culture and customs, or cuisine? Is it exclusively for a privileged few who can afford the experience of studying abroad? Or can everyone have an opportunity to be “China literate”?

“Asia literacy may just be about encouraging young people to think about Asia as an option for their future, for travel, for a gap year, for a career,” said Angela Merriam, a senior policy analyst at China Policy in Beijing.

For those who do take the leap and learn Chinese, there are both linguistic and cultural barriers. Westerners, accustomed to liberal teaching methods, may complain that Chinese teachers’ style is too rigid.

“Many U.S. school administrators share that there is some level of frustration with Chinese teachers approaching instruction as if they were teaching a group of Chinese children, as opposed to a group of American children,” Mr. Livaccari said.

For teachers who do adapt to American schools and classrooms, it is sometimes a struggle to excite students about China because it lacks the contemporary cultural appeal of Japan and Korea.

Foreigners studying Chinese may find Chinese popular culture difficult to connect to, and while Chinese studying abroad may enjoy watching television (also to improve their language skills), Chinese television offers foreigners a diet heavy in bloody, anti-Japanese war dramas and entertainment styles that may be difficult to understand. But the strength of the Chinese economy and pressure from parents and school districts for schools to offer Chinese language classes trumps China’s lack of soft power.

What about foreigners who live in China and learn to speak the language well? Quite a few say that there’s nothing as annoying as the question, “But how many real Chinese friends do you have?”

“Even though you speak Chinese well, it’s sometimes hard to develop close relationships,” Mr. Livaccari said. “It’s about language, but it’s about so much more than language.”

For Mr. Stead, it all started by accident; growing up in Australia, the two Malaysian children at his school were the closest he ever got to Asia. A few years later on a flight home, he noticed the person next to him on the airplane struggling to fill out an immigration card.

“We started chatting,” Mr. Stead said. “He was coming from Yunnan in China to study in Perth and was going to live a few streets away from me. Now he’s one of my best friends. Around that time, I had some elective classes at university so I decided to take the most different class I could think of — Chinese.”

Share
This entry was posted in How To Learn A Language, Language History & News, Learning Chinese. Bookmark the permalink.